Microsoft have released details on their new tablet to compete against Apple’s iPad and the range of Android based tablets on the market.

The new Microsoft made hardware will be released with Windows 8 and Windows RT later this year.

The Windows 8 Pro model is expected to take off in the corporate sphere, with integration with Windows server platforms it will fill the gap between tablet and Ultrabook.

Features
Surface sports a full-sized USB port and a 16:9 aspect ratio – the industry standard for HD.

The casing of Surface is created using a unique approach called VaporMg (pronounced Vapor-Mag), a combination of material selection and process to mold metal and deposit particles that creates a finish akin to a luxury watch.

The unique VaporMg approach also enables a built-in kickstand that lets you transition Surface from active use to passive consumption – watching a movie or even using the HD front- or rear-facing video cameras. 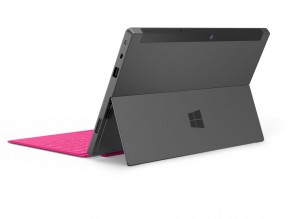 Find more information at http://www.microsoft.com/surface/ or from NAR Design prior to release.