It is pretty well known that we deal with nbnco.com.au a lot in Fixed Wireless (FW) and Fibre to the Node (FTTN) technologies. We have experience in Fibre to the Premises (FTTP) as well and try to get anyone that can away from Satellite (Sat or SkyMuster) if we can.

We’ve even been accredited as NBN Business Advisors due to our training and commitment to getting people connected.

Here is a situation that we just can’t get our heads around. We’ve known about it for a while and were hoping that logic would come to the fore and prevail. Alas…

As the NBN rollout progresses there have been two technologies available outside of towns – Fixed Wireless and Satellite (or SkyMuster).

Great! NBN is here! We finally have the suburban equivalent in the bush!

Unfortunately the “equivalent” is not so equal when you compare three major components; price, quota and latency, so we must get into a little bit of back story to get up to speed.

Satellite plans are more expensive that fixed line or fixed wireless plans, are limited in the amount of data that you can use per month and have a latency of 550ms as a minimum. This is the delay that your connection has to the internet and here is a comparison of latency off the top of my head:

So, you can see that Satellite is the poor cousin of NBN technologies and is not at all equivalent (IMO).

Sure, better than nothing and great as the worst available if there is nothing else, but by no means equivalent. Satellite is the most costly and therefore most precious of the NBN technologies – it should go to those few that cannot get anything else.

We have worked with RSPs like Aussie Broadband and various NBN teams such as NBN Local and now the ICT Channel in NBN Business to identify sites through local knowledge and hours of mapping to try and get clients a better solution. It is tedious, time consuming and frustrating work, so why do we do it? To get a better result for our clients – often at our cost.

Now we come down to the rub, the irk, the seething anger, the unbelievable lack of logic and the reason for this post.

Some, at a later date have questioned their connection type. Maybe they’ve seen a Fixed Wireless tower on the horizon or talked to someone at the pub or despaired at their internet banking failures, inability to use interactive services or lack of Netflix. Either way, they’ve found out about Fixed Wireless and want to have a go.

They’ve had their bite of the NBN cherry and it has left a sour taste in their mouth.

But NBN promotes their “Technology Choice” program for those that want to upgrade their connection doesn’t it? Anyone that wants to pay for a better connection can, right?

“The Technology Choice Program provides interested parties with the option to pay for a switch to their nbn™ broadband access network technology.” – nbnco.com.au 22/11/18

So now we get to the infographic. 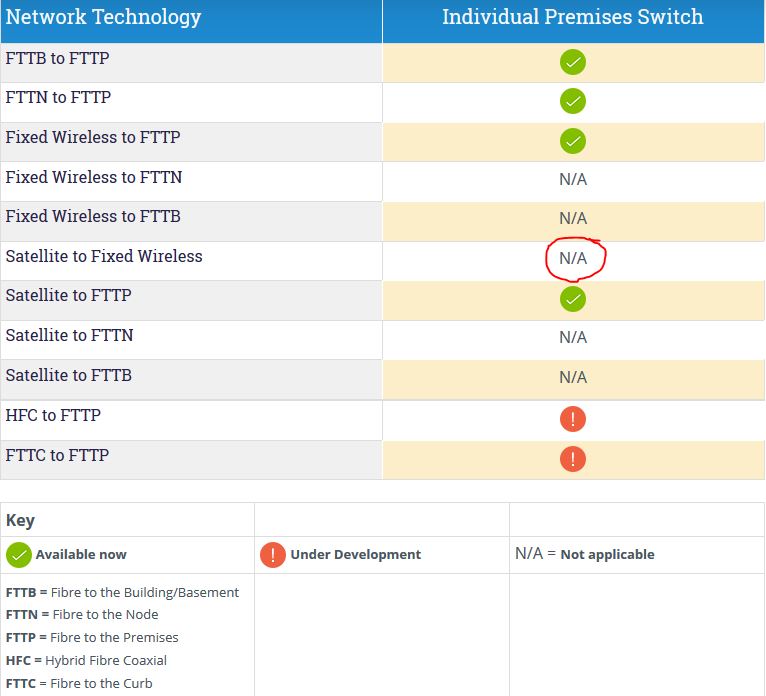 If the customer has already had a Satellite install, their only option in Technology Choice upgrades is to upgrade to FTTP! I must repeat this in a different way as it makes no sense.

If SkyMuster was the only option for NBN and then a Fixed Wireless tower is built in the area, users that went with SkyMuster cannot even pay to change to Fixed Wireless.

“But they have the chance to upgrade to fibre”, I hear you ask. Yes, they have the choice to pay the fees to get a very rude shock at the cost of upgrading to fibre. Someone in Queensland spent over $200k for an upgrade but that wasn’t from Satellite to FTTP, it was from Fixed Wireless to FTTP.

As far as we know, there has not been a single application for NBN Technology Choice from Satellite to FTTP. Please correct us (with evidence) if we are wrong.

Here is some media regarding NBN Technology Choice. You’ll note a distinct lack of discussion about Satellite.

This isn’t about money but a stupid rule that is put in place perhaps for a historical reason that certainly doesn’t apply today.

So there you have it. If you took the opportunity to get NBN SkyMuster in an area that later became Fixed Wireless, you chose poorly. It isn’t your fault though, NBN would have told you that it was your only choice – and now it is.