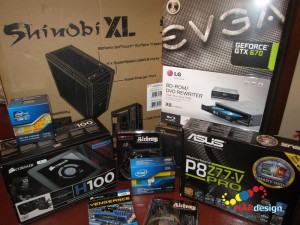 A while ago a client came to NAR Design with some very specific details of the gaming PC that he wanted to build.

We worked through each individual part and suggested some changes including the use of an Intel 330 SSD (Solid State Drive) and the Seasonic PSU (power supply).

The build was for both performance and aesthetics – it needed to look good and perform well so the use of the giant BitFenix Shinobi XL case with side window was chosen. This case has two 230mm fans, one in the front and one in the top as well as a 120mm fan in the back, however the choice of the Corsair H100 Extreme Performance Liquid CPU Cooler meant that one of the 230mm fans would be removed.

Choosing the “K” model Intel i5 processor that is unlocked for overclocking allows plenty of room for tweaking and combining this with liquid cooling provides the best opportunity for stable performance.

After discussions around GTX670 model graphics cards the EVGA GeForce GTX 670 was chosen due to its clean lines.